The history of Abbey Chapel dates back to 956AD, when it was part of the Tavistock Abbey. The main Tavistock Abbey was demolished in the eighteenth century. However, there are a few remains, from Betsy Grimbal’s Tower, Court Gate, a few original walls of the site, and of Abbey Chapel and the Abbey Tower alongside it. 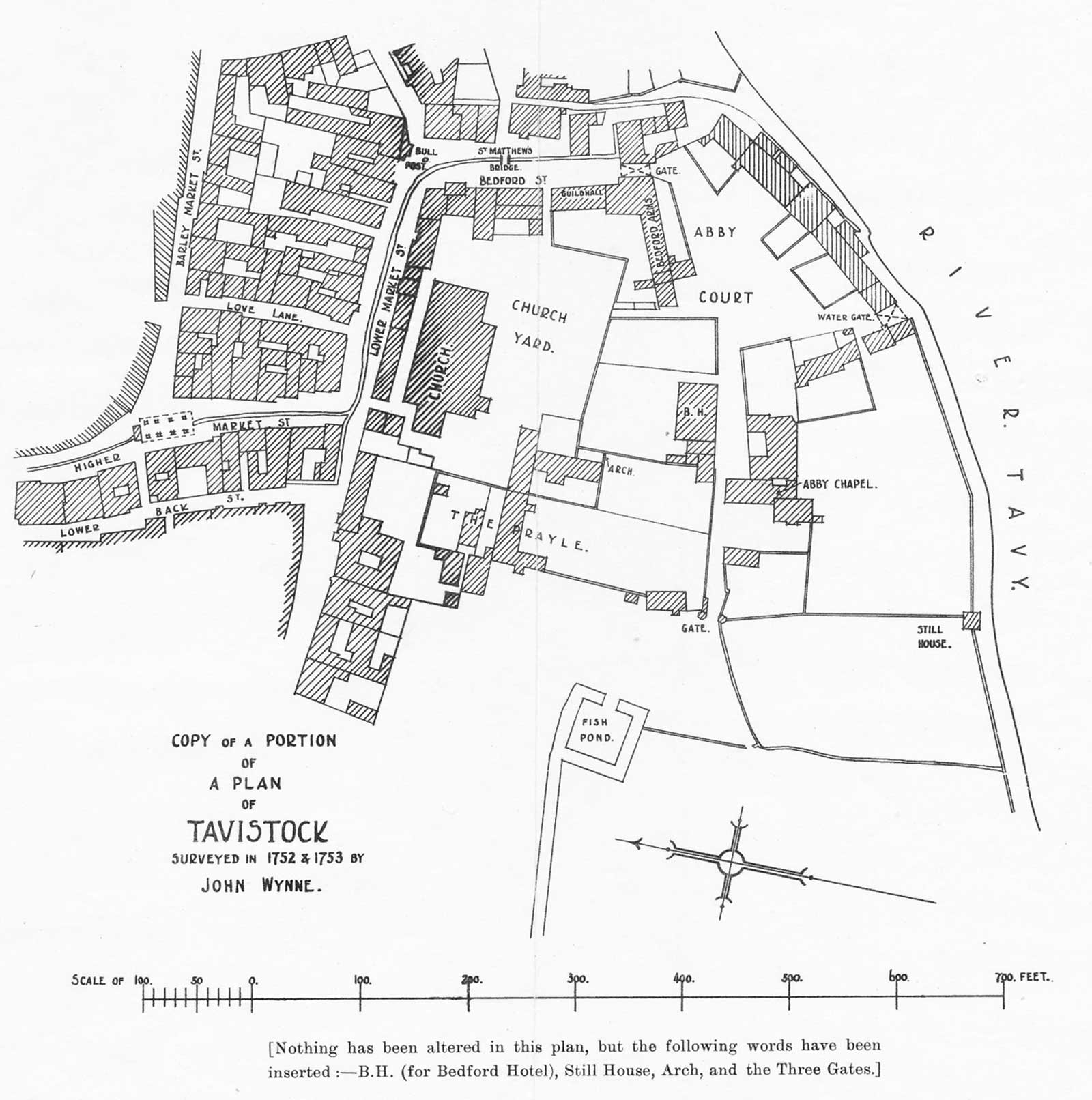 Founded in the tenth century, Tavistock Abbey lasted for more than 650 years until the Dissolution of the Monasteries under Henry VIII. The buildings then gradually decayed, but some have remained, one of the most complete being now known as ” The Abbey Chapel.”

In the year 968 the old monastery at Exeter was revived to be Devon’s chief religious house, and at about the same time a new abbey was built to serve Cornwall, located not in Cornwall itself but just across the river Tamar, at Tavistock.

Thus the recorded story of Tavistock takes us half way back to the time of Christ, to the century before William the Conqueror; and its monastery was built a hundred years before Westminster Abbey.

The Royal Charter which marked the foundation of the abbey was dated 981, during the reign of Ethelred. Among the properties in the endowment were Milton Abbot, Hatherleigh, Rame, and Stoke Climsland.

At that period the Danes were frequently raiding the English coasts and sometimes they ravaged the countryside for many miles inland. In 997 they sailed up the Tamar and went as far as Lydford. On their way back they discovered the abbey at Tavistock which they plundered and burnt down; it was rebuilt during the next few years.

“The Abbey Chapel,” as it is now called, was built adjacent to the monastic infirmary and was the dining-hall for the use of the sick. The earliest mention of the building is in the Exeter Episcopal Register, 1348; the bishop urged the abbot of Tavistock to dine with the brethren in the refectory, “or at least in the adjoining building commonly called the misericord.” This Latin term meaning ” pity ” was applied to various relaxations of strict monastic rule. It is best known as the name of a ledge under the hinged seat in a choir stall; when the seat was turned up, the ledge formed a support against which the monks could rest while standing. Similarly, indulgences as to food and drink were granted to sick monks in their dining-hall.

In the course of time the abbot and most of the community dined in the misericord far more often than in the frater (or refectory), which was used only on high festivals. The frater was pulled down in the eighteenth century and rebuilt as a dwelling house-now the Bedford Hotel.

The misericord was reported to be in bad condition in 1390, so repairs done in 1961-2 were merely the latest stage in work which has been spread over six centuries. The structure as it exists today dates mainly from the fifteenth century, with portions from the twelfth.

When John Peryn became the thirty-ninth abbot in 1523 it could hardly have seemed possible that he was to be the last. On Monday, the third of March 1539, twenty monks assembled for the last time in their beautiful octagonal chapter-house; the deed of surrender was signed, sealed, and delivered to the royal commissioner. The abbey treasures of gold, silver, and jewelled ornaments were taken to the Tower of London. Most of the properties were granted by the king to John, first baron Russell, whose descendants became dukes of Bedford. 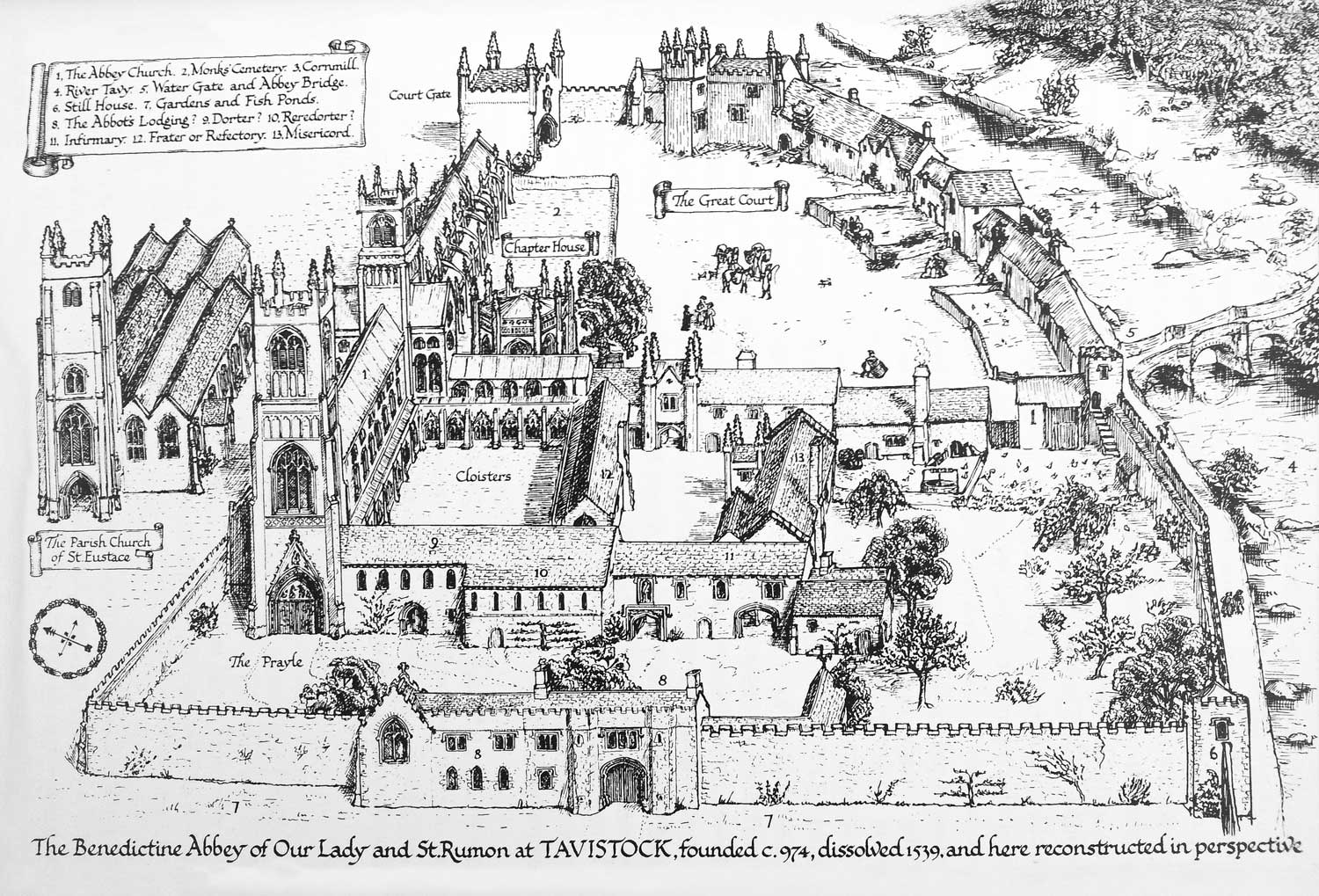 Ten years after the Dissolution the people of Devon and Cornwall rose in spontaneous revolt demanding re-establishment of the chief monasteries. Yet within a century Devon had become one of the most firmly Protestant counties in England, and a puritan stronghold. Francis Russell, second earl of Bedford, threw all his influence into the puritan scale. About the middle of the seventeenth century a presbyterian provincial assembly for the county of Devon was set up on the initiative of George Hughes, formerly vicar of Tavistock. (By 1715 there were 76 meeting-houses in the county of which 52 were presbyterian).

Royalist troops occupied Tavistock towards the close of 1642; this was the cause of Hughes’s departure; two years later he was appointed vicar of St. Andrew’s, Plymouth. The name of his immediate successor as vicar of Tavistock is unrecorded, but at the next vacancy the earl of Bedford allowed the inhabitants to make their own choice. They chose Thomas Larkham, a colourful character with a barbed tongue. He was neither presbyterian nor puritan, but a boisterous independent. 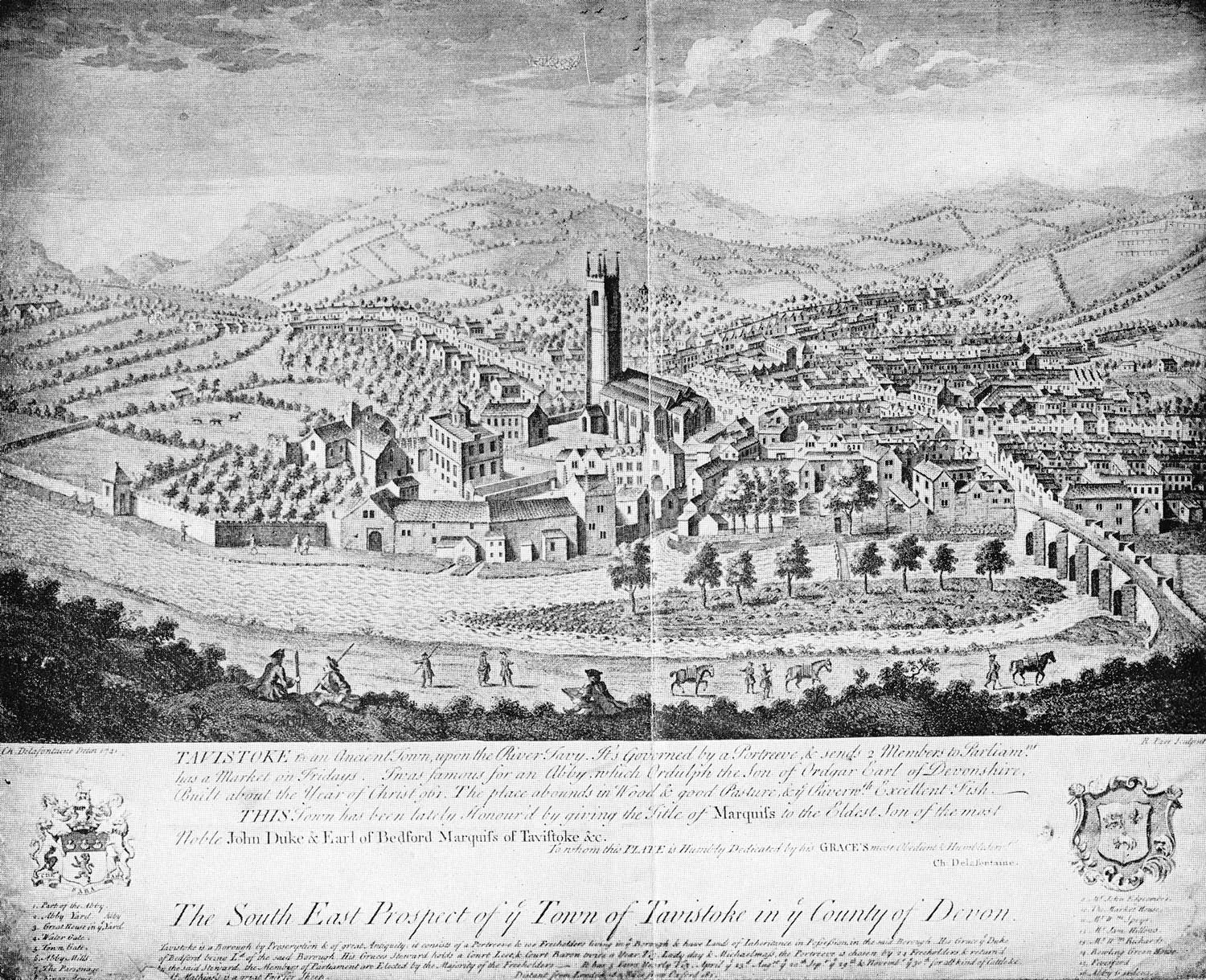 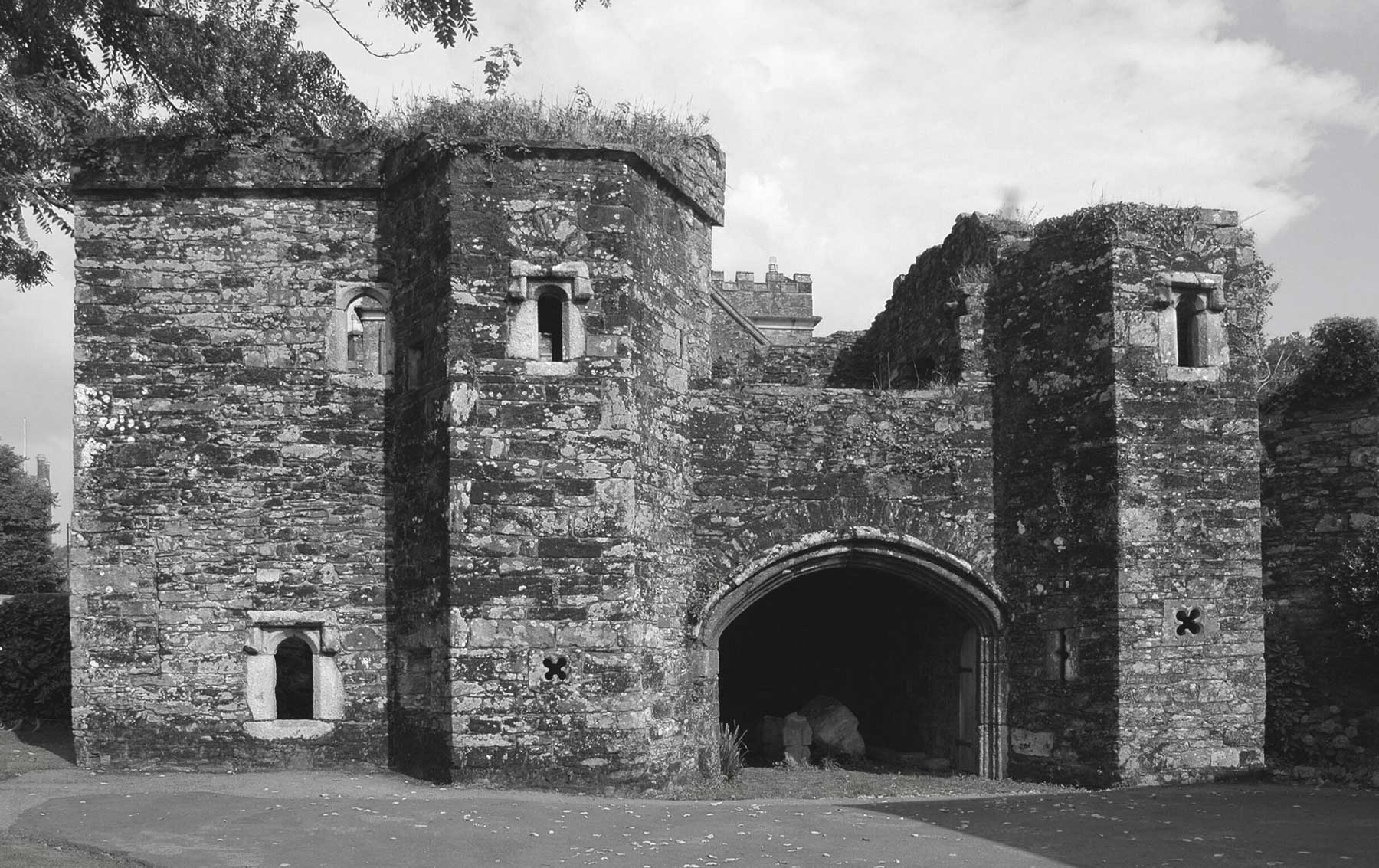 After Larkham’s death in 1669 Tavistock dissenters were encouraged by occasional visits from a presbyterian minister, William Pearse. The names of Larkham and Pearse appear in published lists as first and second in the succession of ministers of the Abbey Chapel, but this is contrary to evidence. It was not until 1687 that the dissenters were numerous enough to require the services of a resident pastor. Taking advantage of the Declaration of Indulgence issued by James II in that year, they invited an elderly Cornish minister, Henry Flamank, to settle in the town. Where he ministered to his people during the next three or four years is uncertain.

About a year after the passing of the Toleration Act (1689) a new lease of the abbey site was granted by the duke of Bedford to Thomas Willesford. The duke, whose personal sympathies were wholly presbyterian, excepted from the lease one building, the misericord, which he placed at the disposal of Flamank’s congregation. In 1701 the second duke gave a formal lease of the hall, thenceforth called the Abbey Chapel, to the local presbyterian trustees. There is evidence that the hall was converted into a meeting-house about 1691 – ten years before the granting of the formal lease.

The presbyterian period in the history of the chapel continued for over a hundred years. During that time reconditioning of the fabric included the erection of a new roof over the old trusses (1691) and a plaster ceiling (1755). 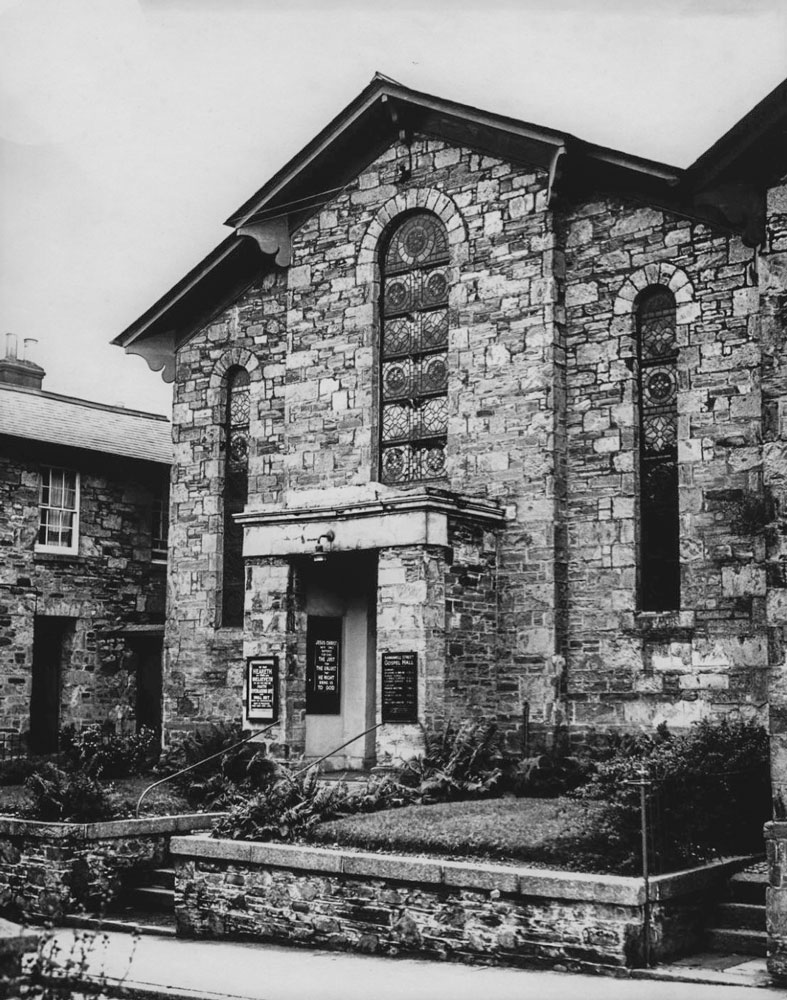 A site for the chapel was provided by the Duke of Bedford. It sloped steeply upwards from Bannawell Street towards Glanville Road-so much so that the gardens at the rear of the building were almost level with the roof. The site was levelled in 1846, it was necessary to cut back into solid rock. An elderly lady who was a member of the Bible Christian congregation but too poor to contribute financially to the new Chapel, pushed a wheelbarrow along the planks and helped to carry out the stone as it was excavated.

Building was of stone obtained from Buddle Quarry (since worked out) and sometimes called Buddle Quarry stone. It is greenish in colour, rather soft, and tends to flake, especially when built with the grain vertical. The roofs were slated. The property including two cottages. The lower one (No. 9) was formerly the caretakers residence and the higher one (No 10) was intended for the Minister. No. 10 was later occupied by the caretakers, rent-free for their services and number nine was let out at a weekly rental for many years and until 1961 of 10/3p including rates, the landlord being responsible for repairs.

The Chapel was approached by a flight of steps. The grass plots on either side were formerly enclosed by iron railings. At the foot of the steps was a pair of iron gates surmounted by an iron arch carrying a gas lamp. This ironwork, clearly shown in the 1903 watercolour now in the Abbey Chapel tower room, was removed to make munitions during the Second World War.

The building had a large window in the front wall. Flanked by two smaller windows, and four windows in each side wall. All these windows had leaded lights with coloured glass. There was a gallery on three sides of the building supported by seven round iron pillars, and approached by two wooden stairways from the entrance hall. Laws from the front ends of the gallery leading to the school room.
The large platform was approached by steps on either side. In front, under the floor, was a very conveniently arrange baptistry, constructed in 1912. Behind the platform, under a round arch, with the seats for the choir and a space for the pipe organ which was removed in 1911 and went to Harrowbarrow Methodist Chapel.

Interior woodwork in the chapel was pine. The front and back of the platform in front of the gallery were beautifully ornamented and contained openwork panels of cast iron. The whole building was heated by hot water circulation from a solid fuel boiler. Originally the lighting was by gas and electric light was installed in 1920